Following on from his current exhibition at the Nevada Museum of Art, Center for Art and Environment, Reno, USA, LARRY MITCHELL brings to JahRoc Galleries his 2015 release in this series.

These are a collection of large scale paintings of many stunning Indian Ocean Island areas where Larry has travelled and witnessed the effect of globalisation and climate change, and is recording them as they are now for their unique beauty. 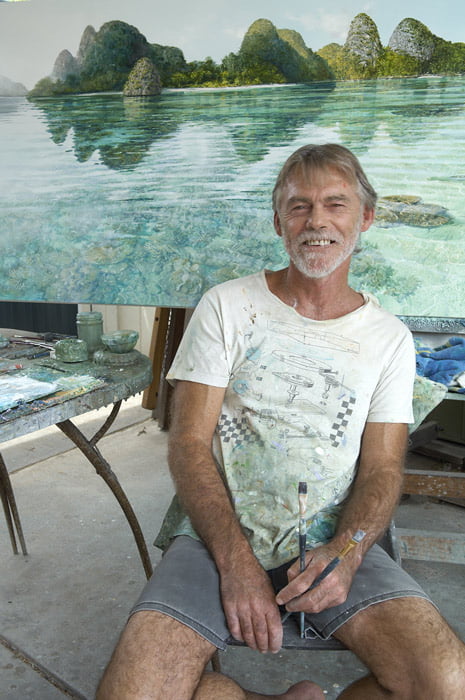 pictures of island and coastal communities that are coming under the influence of climate change and globalization.  The title of the project originating in the reality that for every one degree Celsius rise in sea temperature, that there would be dramatic (and visible) consequences for isolated communities on low-lying islands -some of which are already in a state of steep transition due to globalizing forces such as political and technological intervention, resource exploitation, (including illegal logging and unsustainable marine harvesting) as well as tourism and the attendant cultural homogenization that it causes.

Furthermore, I wanted to link this contemporary project with the historic output of ship’s artists and marine artists of the past.  To that end, I have chosen the traditional forms of the panorama and the topography.  My precursors were often unwitting or unwilling servants of the expansionist ambitions of empire, or of the, sometimes, objectifying tendencies of scientific expeditions.  My idea, then, has been to reuse these forms by drafting them into the service of an art of homage and humility which could build an appreciation, love for, or yearning for the intrinsic beauty of these islands and coast – and an understanding of what we might be about to lose.”
Larry Mitchell 2015