Iconic Western Australian Artist – Larry Mitchell is making a global impression with his ongoing “1 Degree Centigrade” Project. He was invited by the Nevada Museum of Art, in the USA to spread his story by way of these incredible paintings which are on exhibition now until the end of July 2015.

Larry Mitchell has been travelling the South Pacific Islands for over 40 years, starting with the Abrolhos Islands, off the coast of Geraldton, WA. He spent many years teaching in Geraldton in his early career, and grew up close by in Northampton. His love of fishing, boating, the ocean and in particular his passion for painting led him to explore the Abrolhos Islands. His incredibly detailed paintings and drawings of this region have become Larry’s way of documenting how these small islands and fishing villages have been changing gradually over many years due to climate change.

Travelling and exploring further afield has taken Larry Mitchell to places like the West Pilbara, West Kimberley’s, Northern Western Australia, Rottnest Island, West Sumatra, the coastal villages of Papua New Guinea, and even as far as the sub-Antarctic islands, where he has also noted coastal changes and has painted these areas also.

Larry Mitchell’s paintings over the last 20 years or more of these areas can be admired for exactly what they are on face value – unbelievably incredibly detailed paintings that leave people in awe of his talent, or they can be taken at this deeper environmental level and for being a part of a large collective documentation, with great historic value.

The “1 Degree Centigrade” project has been an ongoing documentation and is named to reflect the one-degree centigrade increase in ocean temperatures that is causing so many of the changes that he is witnessing. 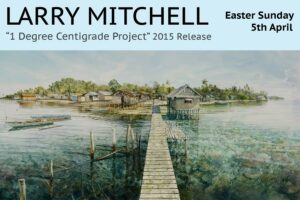 FIND OUT MORE HERE about this exhibition…

The gallery of works below have been acquired by the Nevada Museum of Art, Center for Art and Environment, Reno,USA. They are an internationally recognized research center dedicated to supporting the practice, study, and awareness of creative interactions between people and their environments.